Statement of the GBC of the ISKCON adopted March 9, 2013

As the Founder-Acharya of the International Society for Krishna Consciousness (ISKCON) and the preeminent teacher and ultimate authority within our society, Srila Prabhupada has a unique relationship with every ISKCON devotee.

Lord Krishna, the Supreme Personality of Godhead, is the original guru whose Divine Grace descends through the medium of the Guru Parampara. As such, a devotee is ultimately delivered by Sri Krishna acting through a combination of various manifestations of His mercy. These include, but are not limited to, the chaitya guru, Srila Prabhupada, the Guru Parampara, one’s diksha guru, other siksha gurus, the Holy Name, sastra, and the nine processes of devotional service.

Overall, the primary duty of all diksha gurus, siksha gurus and others in leadership positions is to assist Srila Prabhupada in his service to his Guru Maharaja Srila Bhaktisiddhanta Sarasvati Thakur, and our Brahma Madhva Gaudiya Sampradaya.

Srila Prabhupada has clearly explained that devotees who are strictly following the Krishna Conscious principles are acting on the liberated platform, and, as such, are pure devotees, even though they may actually not yet be liberated. [2] (Such unalloyed devotional service is not necessarily determined by one’s role or position of service, but by one’s realization.)

Those who accept the service of diksha or siksha guru within ISKCON are mandated to be strict followers of the instructions of Srila Prabhupada, and, as long as they follow, they are acting on the liberated platform. Thus they may serve, as Srila Prabhupada ordered, as bonafide representatives of the Lord and the Guru Parampara and be a via medium of Their mercy. Yet it should be clearly understood that if such diksha or siksha gurus deviate from strictly following, they may fall down from their position.

Thus, to act as a diksha guru in ISKCON means to serve under the GBC and in cooperation with other ISKCON authorities by functioning as a “regular guru” as Srila Prabhupada has directed. This statement, while conclusive, is not exhaustive in its

discussion of these principles. The GBC may authorize additional statements and papers in the future to further explain the preeminent position of our Founder-Acharya Srila Prabhupada, the role and responsibilities of those who serve as gurus in our society, and the related duties of ISKCON members and initiates.

All GBC members must distribute this resolution to all ISKCON temples, communities and congregations via all appropriate means of communication for the education of all ISKCON members. This statement shall also be studied in ISKCON courses including introductory courses, the ISKCON Disciple Course, the Spiritual

Leadership Seminar, and other relevant venues. Reading this statement, and affirming it has been read prior to initiation, shall be part of the test for all prospective initiates.

The ‘Lines of Authority’ Paper is available in the following languages:

1 More details on these spiritual relationships and duties may be found in the official “Lines of Authority” Paper approved by the GBC in 2012.

“A person who is liberated acharya and guru cannot commit any mistake, but there are persons who are less qualified or not liberated, but still can act as guru and acharya by strictly following the disciplic succession.”

“We may not be cent percent perfect, but as far as possible, if we follow the instruction as it is, that much perfect. In this way one will get perfection. So one has to follow. The same example, try to understand, that a perfect, expert technologist or technician or mechanic is working, and somebody is working under his instruction. So this somebody, because he is strictly working under the instruction of the expert, he’s also expert. He may not be cent percent expert, but his work is expert. Is that clear? Because he is working under the expert. Do you follow? So if you follow pure devotee, then you are also pure devotee. It may not be one is cent percent pure. Because we are trying to raise ourself from the conditional life. But if we strictly follow the pure devotee, then we are also pure devotee. So far we do, that is pure. So pure devotee does not mean one has to become immediately cent percent pure. But if he sticks to the principle that “We’ll follow a pure devotee,” then his actions are… He is as good as a pure devotee. It is not I am explaining in my own way. It is the explanation of Bhagavata. Mahajano yena gatah sa panthah

In service to: His Divine Grace A.C. Bhaktivedanta Swami Prabhupada 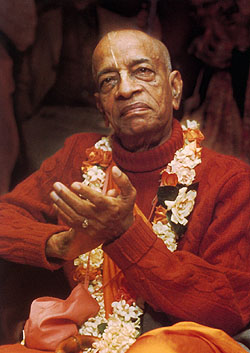